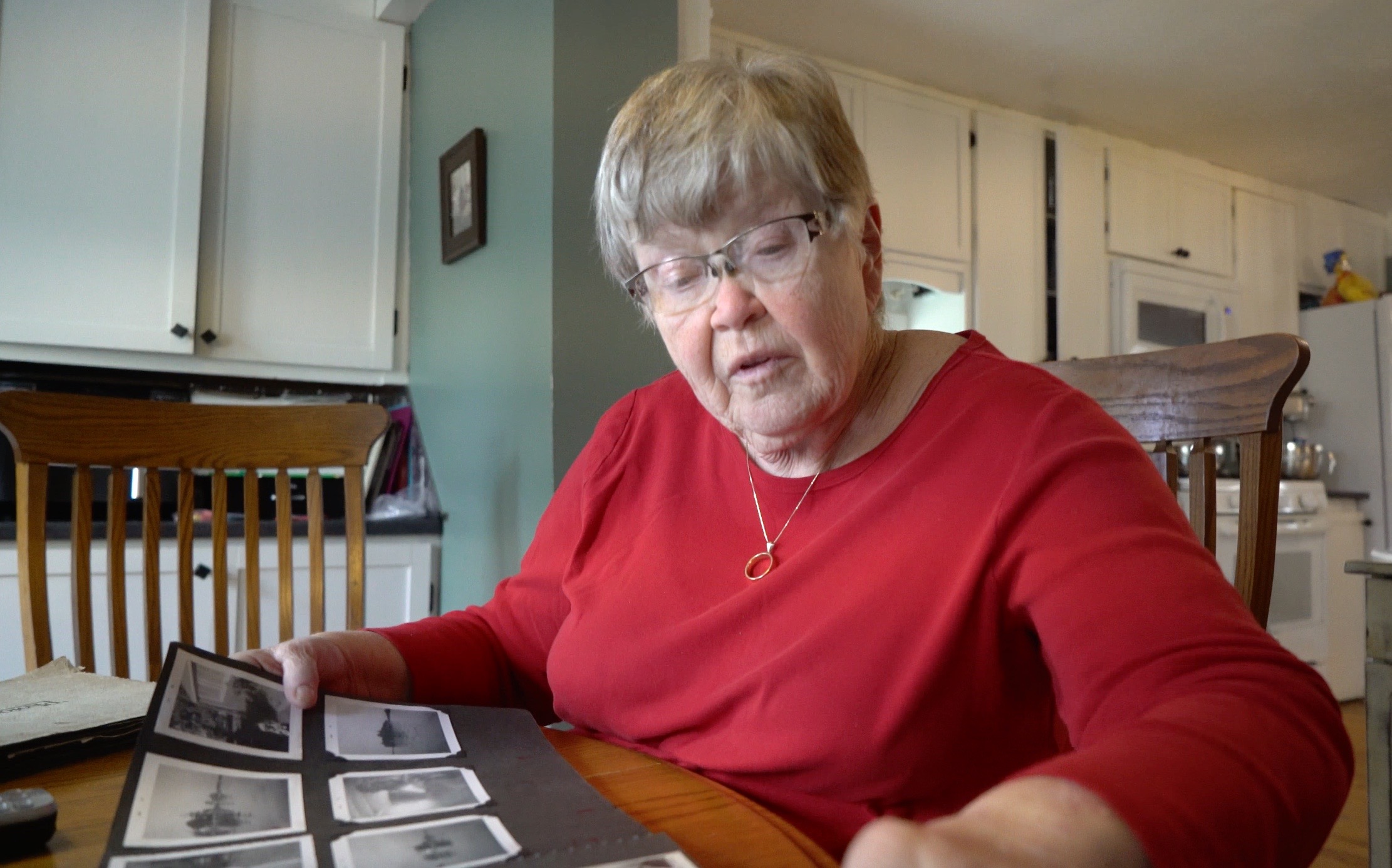 This conversation with Gail Holtzhauer was transcribed September 29, 2022 at her home in Matawatchan (Snider’s Tent and Trailer Park).

“I was born in the area and lived here all my life. My great-grandfather built this house. The Grampa Strong that built this house came here in 1880. He first lived at Maberly and saw he could make money trapping and hunting and that’s why he moved here. He wanted to move here on the 17th of March (St. Patrick’s Day) being a good Irishman but actually arrived the next day.

He had a mill down here on the Aird Lake Creek and sawed all the lumber for this house and several other homes and barns in that mill.  He had farms animals and trapped a lot. They had a store here at one time and traded furs with the Indigenous people located at the entrance to our Park.” 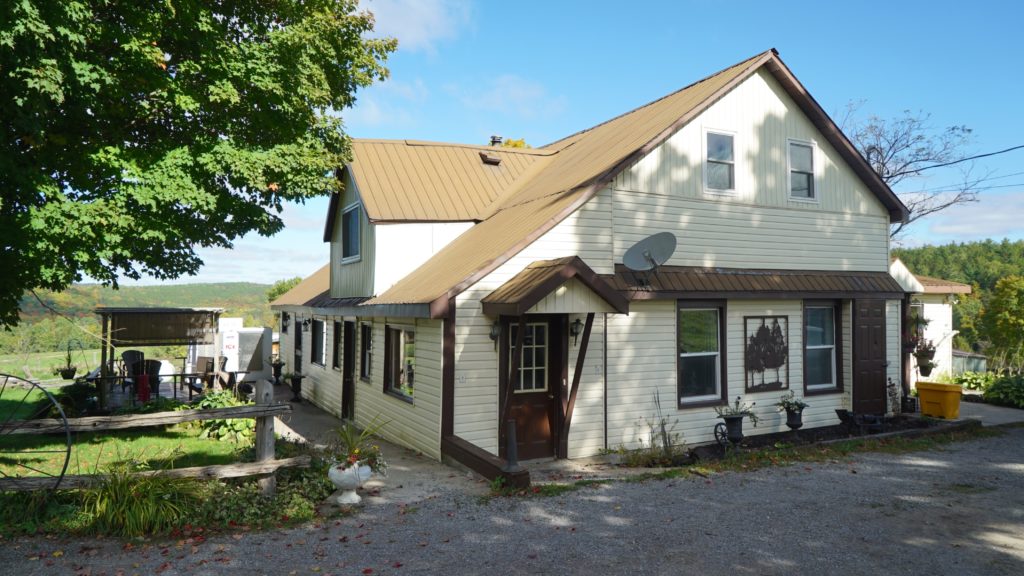 The home and store of Gail Holtzhauer at Snider’s Tent and Trailer Park.

Note: Gail described the house as a ‘plank house’.  Planks were milled by her great-grandfater as a full 2″ x 6″ board, then stacked horizonally to form the walls, one on top of another.  Full 2″ x 4″ boards were nailed vertically inside and out to hold the stacks of planks together.  The walls were finished on the inside with lathe and plaster. The end result was a very strong, house wall measuring about 10 inches thick.

“My husband, Terry, passed away this April.  We met in Kaladar at the garage.  His father, Roy Holtzhauer, owned the Shell garage and Terry worked for him. My car broke one day and I stopped at Mrs. Brown’s (Gene Brown, on the Mazinaw). She said there was a mechanic in Kaladar and stop in there, so I did, and that was where I met him 52 years ago.

Our Park (Snider’s Tent and Trailer Park) was started in 1960 by my parents, Barney and Beulah Snider. We had property on Aird’s Lake.  They had a cottage, built in the 1940s that they rented and then they built another cottage.  Mother always kept fishermen in the house and Dad had hunters. People had to do a bit of everything in those days. Mom and Dad decided to start this campground with 4 or 6 sites and charged $.75 or $1 per site.  Back then they were only tents, we never saw a trailer. They never left anything, they took everything home. And, they might come for a couple of weekends. They didn’t come every weekend like they do now because people weren’t as flush with money.

In 1967 they flooded Centennial Lake and that’s when we got this property here. This was all our property and it was all flooded. Centennial Lake was flooded for the hydro dam at Mountain Chute.  The Madawaska River is full of dams. There’s a dam at Palmer Rapids, there’s one at Barrett Chute, Stewartville, Calabogie, and Arnprior.

We now have over 200 tent-trailer sites. Our son, Luke, manages the outside work now and I manage the books and inside work.

I went to school here in Matawatchan in a one room school. We were bused to school.  When I went to school it was the third school built for the area.  I only went about 3-4  months in the old school before they built a new school. The year I finished Grade 8 we had about 40 students in the school.  It got to be really big then dwindled. Today, there is about 20 students from Griffith-Matawatchan that go to the Eganville school.

In Grade 9 I went to the Denbigh School, then, the old Continuation School burnt in 1959. It was located right where the school is now. I didn’t return to the school until 1963 and in the meantime we went to school in the United Church, for a year. Then we went to the Slate Falls school since the church wanted to use the building again as a church so the Grade 9 and 10 went to Slate Falls. The Grades 11 and 12 were in the basement of the Apostolic church.

We only had two teachers, Ezra Ball and Allan Kay.  One day we had Ezra and he would teach math, history, science and maybe geography. And the next day, Allan would teach.  The bus would go to Denbigh and pick-up any kids that were going to Grades 9 and 10 and pick-up whatever teacher was going to Slate Falls.  Ezra was the best math teacher I ever had, I loved math.” 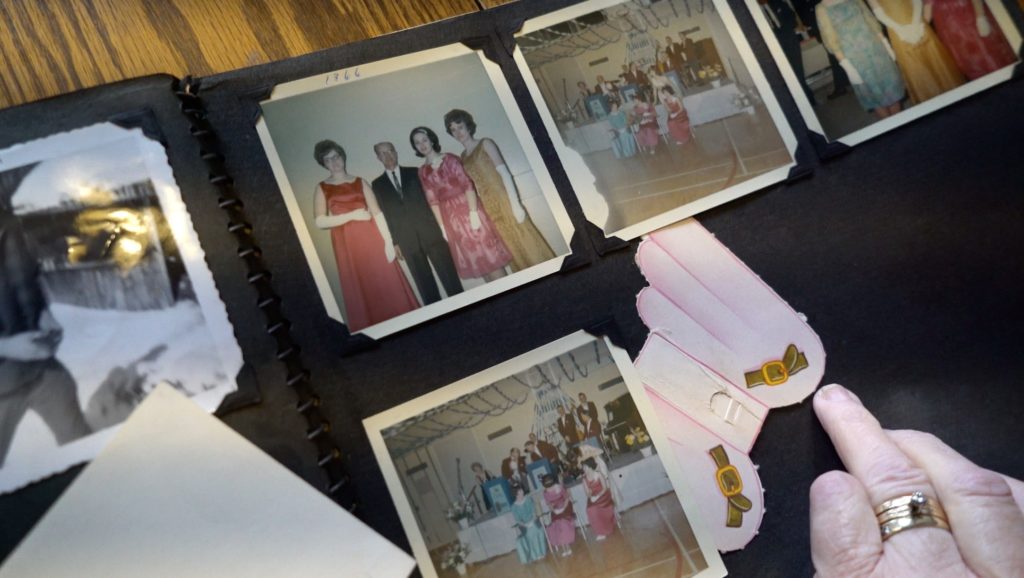 I was a teacher and taught at North Augusta, Landsdowne, and I did a lot of supply work here for 10 years or more. I did Cloyne in the 1990s. I did Denbigh, Palmer Rapids, Calabogie, and Eganville.

My grandfather had the Matawatchan store for about 12 years.  The building is still standing but is a house now.